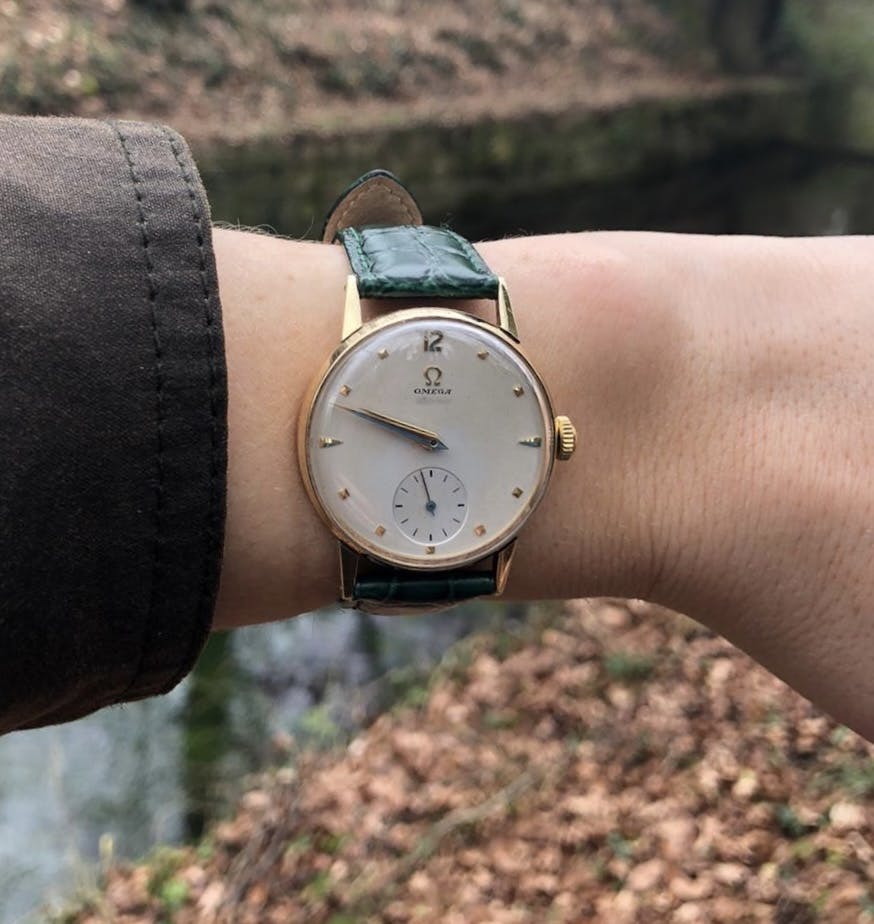 Last night we held our first virtual event: a showcase of Omega watches. It was a great talk, attended by watch lovers from around the UK.

We wanted to share some of the great stories that we heard from the attendees with you. Hopefully you can join our next event.

Andrew shared a wonderful Omega DeVille with the group. He bought it in 1982, in Anchorage, Alaska. He was on the way to Tokyo, and spent the stop-over time in the giant duty-free. He loves that this watch doesn’t have a crown, and is super thin. He wears it as a dress watch.

Michael was given his Omega Seamaster 120m in exchange for providing dental treatment to a Swiss relative. This relative worked for Omega, and gave him a choice of 5 watches as payment for the treatment. One of the watches that he was offered was an original moonwatch (1970’s Speedmaster). He was dissuaded from buying it by his wife, who thought it looked too big on his wrist. He chose this Seamaster and wore it every day for 25 years, until he bought a Rolex when he retired.

We had a fascinating insight into lume from Adrian, who pointed out that the lume on Hamish’s watch had disappeared because it was painted with tritium. Tritium is a radioactive compound that watchmakers used to make watches glow in the dark. It has a half-life of 25 years. Because this watch was produced in 1970, by 1995, the lume will have faded.

Tash showed off her 1940’s gold Omega. It has the famous 30t2 movement inside it, and is still very accurate. She loves simple vintage watches, and particularly likes the pale champagne dial, with gold stud and arrow markers on this watch. Like us at The Watch Collectors Club, she thinks changing watch straps is a great way to make you fall in love with a watch again. She uses Hirsch quick release straps so that she can change the colour of the strap every day. Check out this article that she wrote on being a female watch collector.

Roger showed off his Constellation Double Eagle Chronograph. He described it as a “marmite watch”. We at The Watch Collectors Club love it. The dial is very clear and easy to read, the bezel has lovely roman numerals, and it has a fantastic movement. Roger loves the smooth movement of the seconds hands when the chronograph is Stainless steel sports watches are very popular. We wrote a blog about why that is.

Mashood brought along a Speedmaster “Tintin”, a really interesting watch. This watch was released by Omega in 2013, and was only manufactured for approximately 1 year. Apparently, Omega were working on a Tintin-licensed watch in collaboration with the creator’s family. The family withdrew their support before the watch went into production, so Omega had to remove any reference to Tintin. They did retain the red and white checkerboard pattern – which features prominently in stories where Tintin goes to the moon

The Watch Collectors Club aims to make the watch world simple and accessible to our members. We will run a series of virtual events until it is safe to run events in person. Our events are designed so that members can share their passion, and hopefully learn something interesting. Our next event will focus on stainless steel sports watches. Make sure to keep reading our weekly blog so that you don’t miss out.

If you know anyone who might be interested in learning more, please let them know about us. Communities are always better when they have lots of members.

How to Take Pictures of Watches

Event Round-up - The Watches We Saw