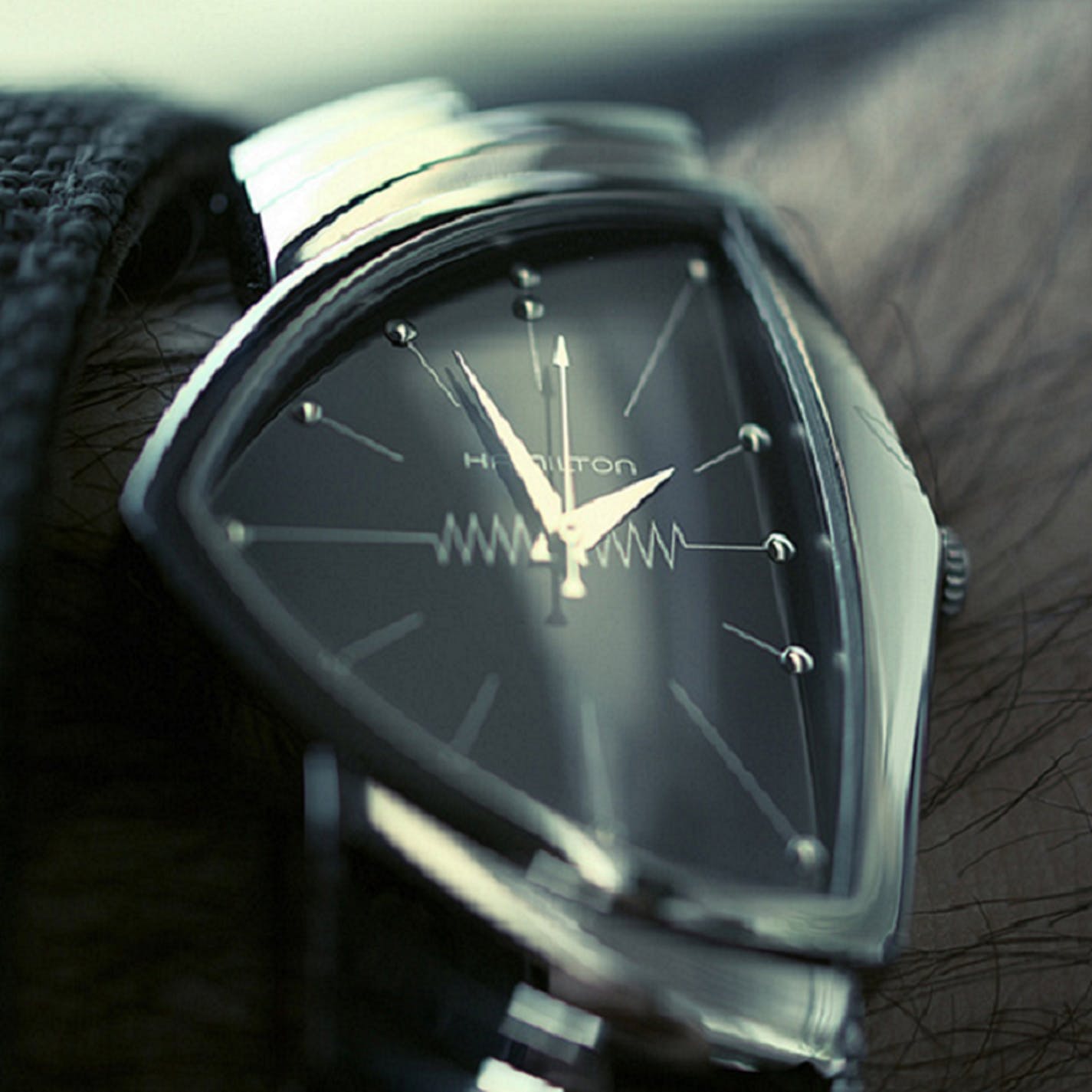 This week we are featuring a guest post from Montres Publiques, a blog focussing on vintage watches, watchmaking history and the watch industry as a whole. If you like what they have written, you can find a lot more here.

When people think ‘movie watches’, they often think James Bond (Omega Seamaster or Rolex Submariner) and maybe Top Gun or Le Mans. Rarely does one’s mind drift to the extra-terrestrial, that is… Men in Black. And of all the funky, eccentric, watches available, which one sits best on the wrist of a secret government alien hunter? The Hamilton Ventura, of course.

The Hamilton Ventura is the original Movie Watch

The Hamilton Ventura was first released in 1957 as one of the world’s first battery-powered, electric watches; and was surprisingly a movie star long before the release of Men in Black. In fact, the watch first became a hit when it appeared on the wrist of Elvis Presley in 1961, in the film Blue Hawaii. Hamilton itself has had a surprisingly significant role in film, appearing in over 500 movies since the early 1930s.

The Ventura was originally designed by Richard Arbib, on request by Hamilton. Arbib was an industrial designer and incorporated many aspects that would become prominent in the 1960s, as futuristic design styles became more popular.

Around 1964, Hamilton had officially discontinued the Ventura – one of the world’s first battery-powered, electric watches. The electric movement, while innovative, was taken from the limelight with Bulova’s release of the Accutron commercially in 1960. The Accutron incorporated a new tuning fork mechanism and was the most accurate timekeeping technology available at the time upon release.

While it is unfortunate that the Ventura was discontinued in the 1960s during the heyday of futuristic design styles, it was thankfully brought back to the shelves in 1988, with continual releases like the 2015 edition to honour the King of Rock’s 80th birthday anniversary.

There are many film watches, and many funky watches, and The Watch Collectors’ Club loves exploring them all. Many thanks to Eric at Montres Publiques for this informative introduction to the Hamilton Ventura. Join us to hear more about watches like these, then please make sure you follow us on Facebook, Instagram, LinkedIn or Twitter.