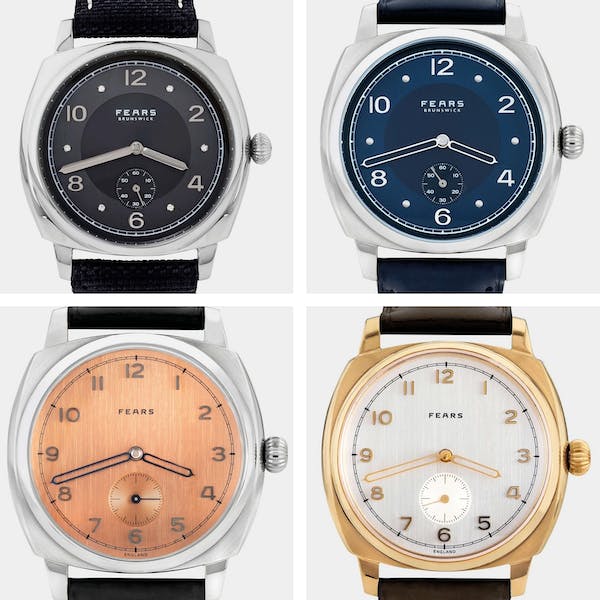 Our recent series of blog posts has covered a range of microbrand watches from around the globe. Many of these brands are very young – only a few years old. However, one of the brands we have mentioned is 175 years old. We at The Watch Collectors’ Club love learning watch brand history. How they were started, and their journey to get to today. Today we are going to explore the oldest microbrand that we have written about in the past few blogs – Fears. If you want to know even more, the company released a biography this morning, available on their website.

Switzerland is the country that is now most commonly associated with watch-making, but that has not always been the case. The UK has a long history of watch making, in fact, it was responsible for around 50% of Global watch production in the early 1800’s. The largest watch brand founded in the UK is Rolex,  and we wrote about them here. Over two centuries, the size of the industry declined, as manufacturers of automatic watches in Switzerland, and quartz watches in Japan and China grew to dominate the market. Over the last two decades the  UK watch industry has grown in size and variety.

Microbrand watch companies such as Farer, Garrick and anOrdain are relatively young, and making high quality watches, at a variety of price points. Bremont is another young company that is directly competing with the likes of Breitling, Tag Heuer, and Longines. They make luxury watches, influenced by both the British military and British feats of engineering.

Christopher Ward and CWC are British brands which make watches in high quantities, but for different reasons. Christopher Ward sell a wide range of high- quality, practical watches, with most of the range priced between £500-1000. CWC have supplied watches to the British military and the general public, since 1980.

Smiths is another famous British watch brand that made watches for the British military during the second world war. One of their watches also went to the top of Everest with Edmund Hillary. Ed wears one of his Grandfather’s Smiths Watches Regularly. You can see this watch in the picture below. Unfortunately, Smiths no-longer makes watches, having switched to manufacturing car and airplane parts in the 1980’s.

Vertex started making watches in the UK in 1916, and made watches for British soldiers during the first and second world wars. After a period of inactivity, the brand was relaunched in 2016 by the Great Grandson of the founder. You can find out more about Vertex here.

Fears, the brand we are focusing on today, also faced a period of inactivity, and has recently been relaunched by a relative of the founder.

Fears was founded in Bristol in 1846, by Edwin Fear. Their first workshop and showroom was located on Redcliff Street. The first watch from the relaunched brand was named after the street. Redcliff Street was also home to E.S. & A. Robinson at the same time. Robinson became one of the largest stationary and packing companies in the world. Within 20 years, Fears had expanded to a second location on Bristol Bridge. This was to be the headquarters of the firm until the 1940’s.

The 1920’s and 1930’s were a pivotal time for not just Fears, but most watch-makers. Rolex invented the first waterproof and dustproof wristwatch, the Oyster, in 1926 which was a key driver in wristwatches becoming more popular than pocket watches. Fears also started making wristwatches around the 1920’s. Fears watches from this period are characterised by striking case shapes, including the cushion case that they use frequently today.

Having survived the first world war, and the transition to manufacturing wristwatches, Fears was faced with the Great Depression of the 1930’s. Watch sales fall dramatically during modern recessions, as many people now think of watches as luxury items. However, before the invention of digital clocks, watches were a necessity for most people. The 1930’s saw Fears not only survive, but also thrive. They ended the decade exporting watches to 95 countries around the world.

Like all good stories, Fears’ history is full of twists and turns. As the world started to recover from the economic turmoil of the 1930’s, Great Britain was dragged into the second world war. All of the Fears buildings were damaged, if not destroyed, during the blitz. The brand survived the second world war, and operated until the mid 1970’s. The 1970’s saw the quartz watch revolution, and was a very difficult time for the mechanical watch industry. You can read more about this period here. Without anyone to continue leading the family business, and in the face of intense competition from Japanese Quartz watch manufacturers, Fears closed its doors.

Fears was relaunched in 2016 by the Great-Great-Great-Grandson of the founder, Edwin Fears. His name is Nicholas, and you can follow his story as he reinvigorates the brand here.

To fund the development of a new mechanical watch, Fears launched a range of quartz watches named the Redcliff – a nod to the first Fears workshop and showroom.

The first mechanical wristwatch that the revitalised company launched was the Brunswick, in 2017. You’ll notice the cushion-shaped case – inspired by one of the first wristwatches that Fears manufactured in the 1920’s. The Brunswick has firmly cemented itself as the core of the Fears range, and is available in a variety of dial colours and case materials.

The Fears story reflects the ups and downs of watch-making in Great Britain over the past 175 years. We at The Watch Collectors’ Club love both the story of Fears, and the watches that they make. The Watch Collectors’ Club is a place for our members to learn more about the amazing world of watches and the stories of the brands that make them. Now that shops are starting to open up again, we encourage you, when you feel safe, to go and see some of these watches to bring the stories to life. If you are interested in continuing to explore the watch world with us, please make sure you follow us on Instagram, Facebook, and LinkedIn.